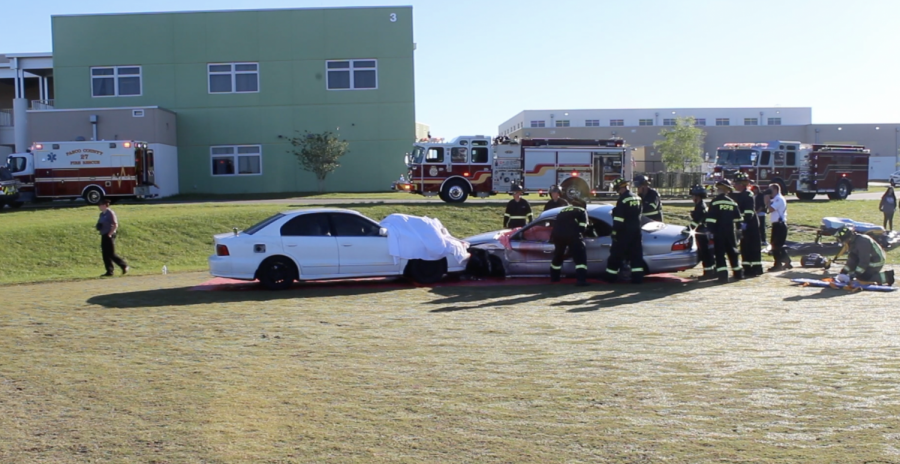 When warned about the dangers of drinking and driving, many students take it as a joke, and never truly realize the magnitude of what driving under the influence can do to your life, and the lives of others. Visualizing the heartbreak that can come from an accident on the night of prom, or any night, may be difficult for some students to do, but Cypress Creek’s first ever Prom Promise has now etched into the minds of students what the true consequences of being irresponsible on the night of prom, could potentially be.

Along with the help of the Pasco County Sheriff’s Office, and Pasco Fire Rescue, our school’s drama department acted out a scene of teenagers on their way home from a prom party, one of which had been drinking. The scenario of a car crash involving an innocent driver played out, depicting another teen ejected from the driver’s seat of her car, followed by the arrival of ambulances, fire trucks, ambulances, police officers, and BayFlight helicopter. An immediate effect of one irresponsible decision had now been shown to affect the lives of so many, in just a matter of minutes.

I spoke to Tori Cochran, one of the students that played a victim of the car crash. The importance of the demonstration to Tori was apparent immediately, as she stated, “This can actually happen, and it’s important to for kids to know that.” Without knowing, or interviewing any of the students that partook in Prom Promise, it was blatant to see the amount of passion, and are they had for putting on this re-enactment. “Some schools just have random students help out [with Prom Promise],” Cochran added, “But our drama department just wanted everyone to know how serious we were, and how serious this all was.”

The imminent danger of teens driving under the influence at prom has been brought to the attention of all 10th through 12th graders at Cypress Creek’s first ever Prom Promise. Hopefully, students will now realize the impact that their one simple, reckless mistake may have on their families, first responders, along with with innocent people, and their families. Prom night is meant to be fun, and magical, but it can turn deadly in an instant, but not if everyone remains smart and responsible.