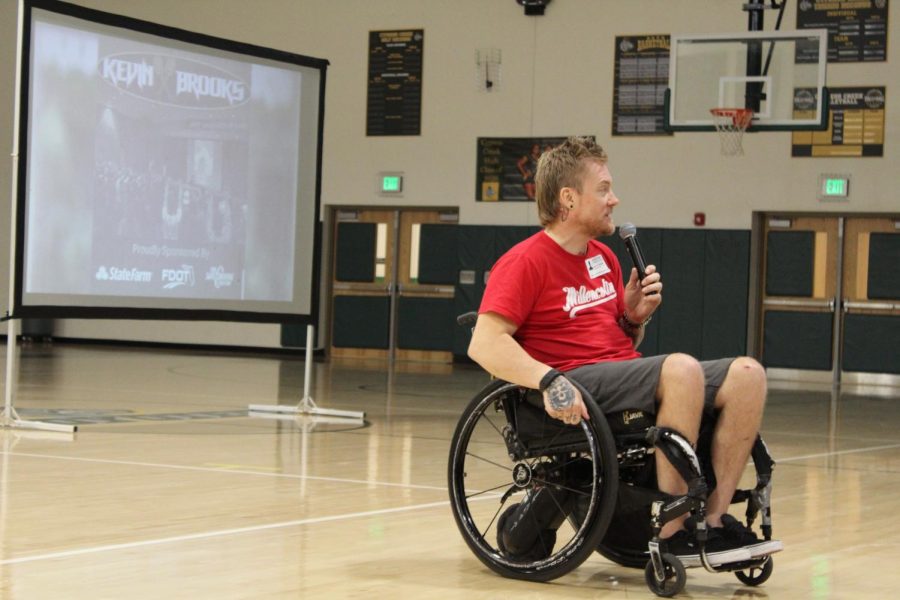 Nearly 20 years ago, Kevin Brooks was leaving a graduation party with his best friend, Brendon. Kevin had consumed several beers and even had a cab called for him by someone else due to his intoxication. But he refused and chose to drive his own car instead. They never made it home. After driving nearly double the speed limit, Kevin’s car hit a curb which caused his vehicle to flip and roll.

The results of the crash were absolutely devastating, and a smashed car only the worst of it. Kevin had a collapsed lung and was paralyzed from the chest down. His friend, Brendon, tragically, did not survive the crash. It was a long and painful recovery for Kevin, filled with setbacks, and heartbreak. Immediately after the wreck, Kevin was faced with a 25% chance of survival. He could not move, and could not breathe on his own. Due to a machine in his throat to keep him alive, he also could not speak for almost six weeks. Every day was a struggle physically to maintain his health, as well as dealing with the grief of losing his best friend, and the guilt he felt. During this time, life seemed almost impossible for Kevin, and he even considered suicide. He would often ask himself, “Why did I live? Why did Brendon die?”. In addition to this, he had horrific dreams caused by the medication and trauma, and he missed all the things that had been the light of his life before the crash; skateboarding, hockey, playing and dancing with his little sister, and Brendon. Things like moving out of Intensive care, simply breathing on his own, or sitting up became major victories. Getting dressed and showering were massive accomplishments. He also had to face Brendon’s family, they welcomed him with open arms and forgave him. But it was still hard.

As time passed, Kevin grew stronger and stronger and made bigger and bigger milestones. He eventually realized that he wanted to share his story with people so that no one would ever have to go through what he did, and he began speaking to teenagers. His mission grew bigger with time, and after the suicide of a close friend, he broadened his message from just safety to include overall positivity. His journey has taken his across North America; he’s appeared on talk shows and has even written a book, “Just Wiggle Your Toes”, named after his life motto. He still struggles every day, but he hopes that students can learn from his mistakes. He encourages students to practice safe driving habits such as not drinking and driving, as well as general reckless behavior; and he encourages passengers to speak up. “The risks slowly escalate [when driving reckless]” he said “We were in car crashes, but we always walked away. This one we didn’t.”

On Monday, all juniors and seniors got the opportunity to hear Kevin’s story; a story that needed to be heard. Reckless driving is a huge threat to teenagers and one that most students take far too lightly. It doesn’t just stop at drinking, you have to be safe overall. It only takes a split second.

Looking around the gym during Kevin’s presentation, it was easy to see that students were moved. It seemed to click for a lot of kids that sometimes there is no going back when you get on the road, and if you’re not careful, you will pay the price for the rest of your life. Towards the end of his presentation, Kevin played a video showing pictures and recordings from his life. A happy teenager, playing hockey, holding his baby sister, riding around on his skateboard. There were pictures of vacations, and him with Brendon. And then the images changed in an instant. A cross with flowers. An obliterated car. A wheelchair. That’s how quickly your life could change. Our lives could change.
Talking to Kevin after the presentation, he said that he doesn’t choose what students take away from his presentation, as long as it’s positive; and whatever you need to take away from it, he hopes students will. As he shares his story, he wants kids to truly know the consequences of what could happen if they don’t practice safety. “It’s twenty years later, and I still live with the guilt. It gets harder… the obstacles I faced twenty years ago are still there. The reality is, one choice can alter your life, and not for the better. Play it safe, and Just Wiggle Your Toes!” he said with a laugh. We also talked about how to cope with life-altering events, in which he gave the advice “It’s cliché, but it takes time. You’ve gotta grieve, you’ve gotta feel it. Don’t push it away. Reach out to someone, find help. Every grieving process is different for every person, so just find what gets you through it.”

As I drove out of the parking lot yesterday, I couldn’t help but have a greater appreciation for my car. But more importantly, being safe as I used my car seemed even more essential than before. For every student driver here at Cypress Creek, I hope you had the same feeling. And if you didn’t, it’s never too late to start; but it could be too late to stop.