Teacher and SRP of the Year 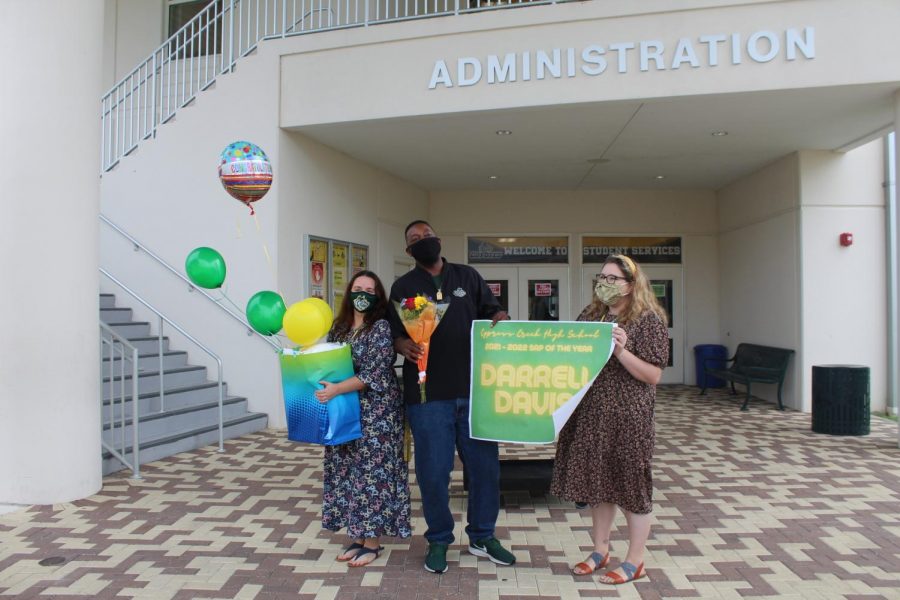 One of, if not the highest, honors a teacher or staff member can be awarded is Teacher and SRP of the Year. On October 6th, 2020, Mrs. Hamilton was surprised in her core class with being awarded teacher of the year. Moments after this Mr. Davis, or more commonly referred to as Coach Davis, was surprised as well as he was announced SRP of the Year. Both staff members were thrilled and very appreciative of these awards, which are a unique way to be thanked and recognized for all the hard work put into their jobs.

Firstly, Mrs. Hamilton was informed she had been nominated teacher of the year. The staff that were present to award Mrs. Hamilton were Principal Hetzler-Nettles, Mr. Copeland, Ms. Floyd, Ms. Hawk, Mr. Uchacz, Ms. Lloyd, Ms. Gricoski, and Ms. Ferry. Mrs. Hamilton was in the middle of helping her students with pre-calculus work when the staff entered to present her with the award. Needless to say, she was awestruck with the honor the school had bestowed upon her. We had the opportunity to ask Mrs. Hamilton about her thoughts on winning this incredible award, where she told us that she was not expecting to win, “I was shocked and I did not anticipate it at all,” she said. We asked what her greatest accomplishment has been as a teacher thus far, and she said “Just seeing my students progress, and learn math and not hate it.” We then asked her what style of teaching helped her win this award, and she responded, “My candor with the students and being honest and open with them. I think students respond and respect it.” When asked why she believes she won, she responded “I guess because my peers think I’m the best teacher on campus right now” with a laugh. Lastly, we asked her if she had a message for her students or peers, and she said, “I’d like to thank them, it’s a really big accomplishment and I didn’t think I would earn this so early in my career.” Overall, this is a huge accomplishment and is well deserved by Mrs. Hamilton. Congratulations!

After Mrs. Hamilton was presented with her award, the Principal and administration team then walked to the front of building 1 and called Mr. Davis down. Mr. Davis was expecting this to be a regular work call and was fully prepared to fulfill his daily duties. when he was pleasantly surprised by the group who presented him with the SRP of The Year Award. Upon realizing what was happening, Mr. Davis’ attitude instantly changed. He happily accepted the award and allowed us to interview him. We first asked him if he expected to win the award and he told us he thought he was getting a call on the radio to do work when he was greeted with an unexpected surprise. We asked him what winning the award meant to him, and he said, “It shows people are listening to me and are taking my words to heart. The people I work with see what I’m trying to do with the kids, and I appreciate that.” His message to the students would be one of confidence and a positive mind frame. He told us, “Many times in my athletic career, as well as professional career, it has been hard to obtain goals. Having confidence in yourself when no one else does will put you in a positive mind frame & give you the boost needed to obtain those goals & pursue other challenges. Truly having a growth mindset in whatever it is you choose to do will always lead you in the right direction; follow your heart & go all in.” When asked what his greatest accomplishment was, Mr. Davis said it was getting his bachelor’s degree through NC State University, and thanked his parents for instilling good morals in him and inspiring him to succeed. Finally, he was asked why he thought he won, and he believes it is because of the support he gives students; whether as a disciplinary assistant, an athletics coach, or just an ear to listen to. He ends his answer by thanking his co-workers for the award and acknowledging the work he does. Congratulations Coach Davis! 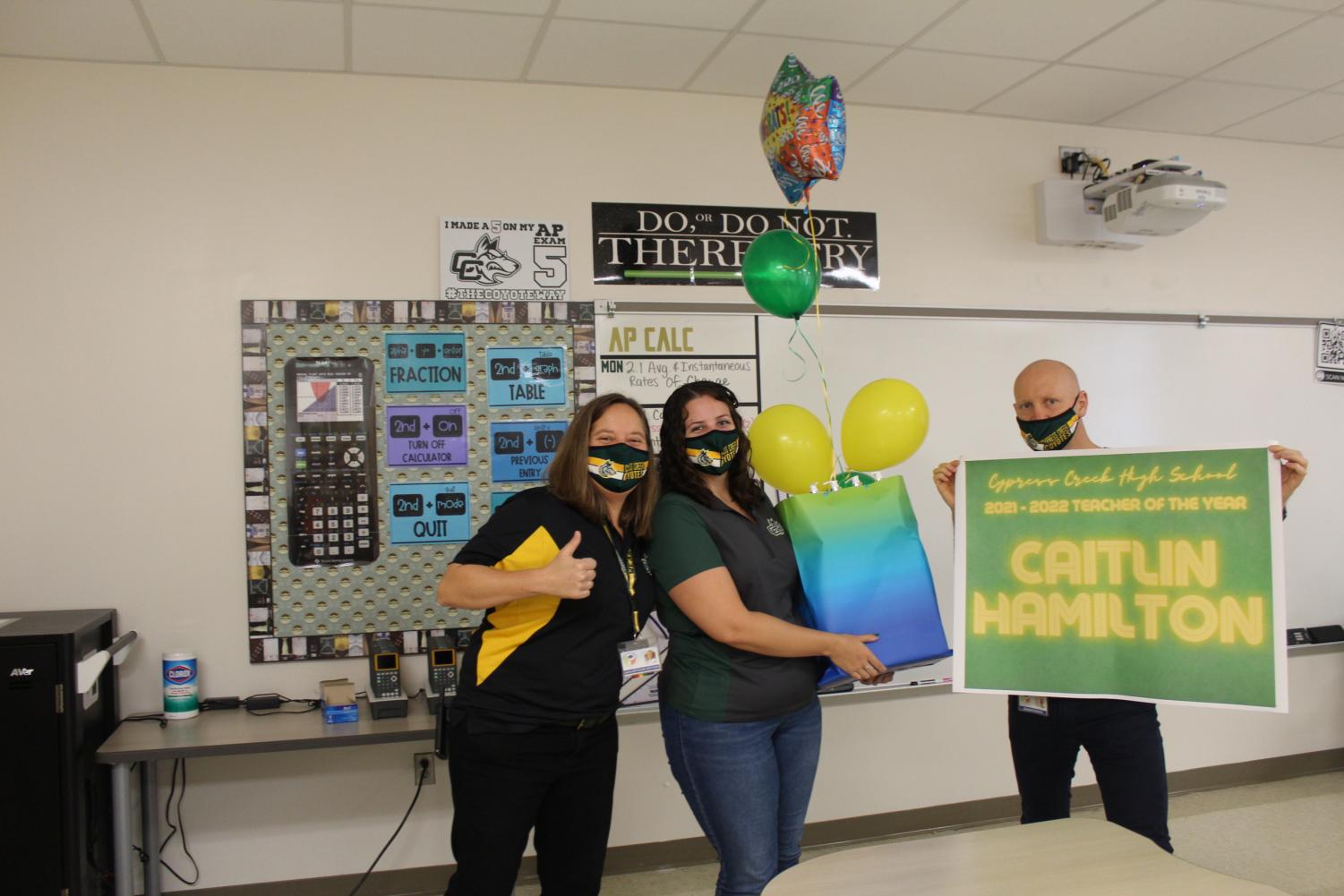 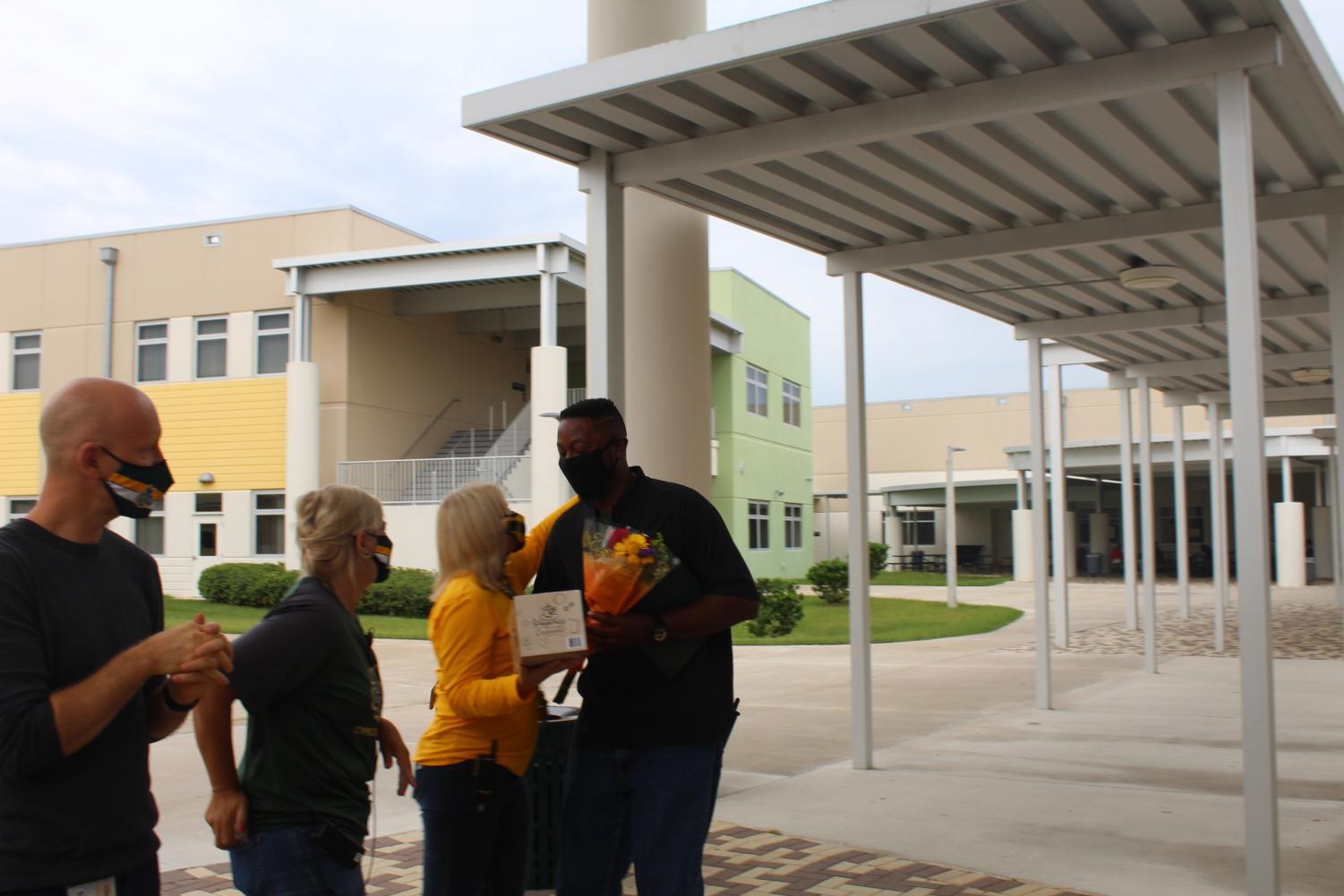