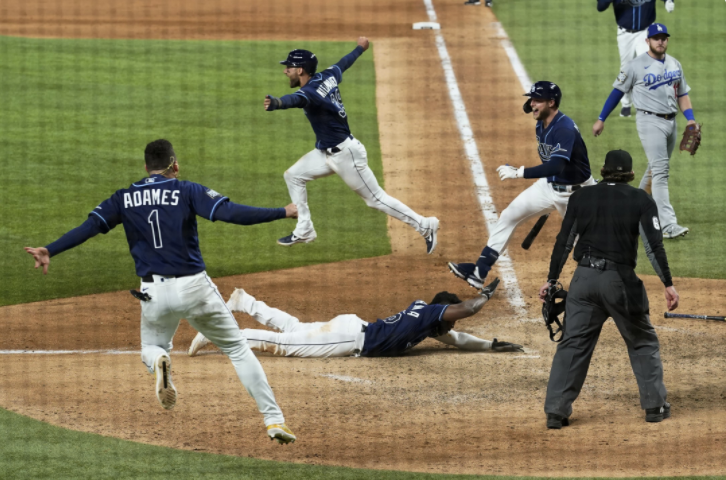 This season, our local team, the Tampa Bay Rays have made it to the ‘20 MLB World Series. This is the second time the Rays have made the world series, the first time being in the ‘08 season. They have accomplished this after defeating the Blue Jays, Yankees, and most recently, the Astros. These wins against such tenacious opponents have given both the Rays and their fans confidence in their ability to win the World Series. Only one thing stands in the way of them clenching this title, and that is the Los Angeles Dodgers. The Rays face the Dodgers in a best of 7 to compete for the World Series. Although the Rays have made it thus far, it has been argued that they have only made it to this position because of the layout of the playoffs this year. As a result of everything going on in the world with the coronavirus, there were 16 teams admitted into the playoffs. There also has been the argument presented of the Ray’s field being different or even unfair compared to other MLB team’s fields. This is because Tropicana Field does not have a retractable roof and is the only field in the league that is like this. Despite the arguments or suspicions, the Rays have still made it to where they are today and now have a shot at the World Series.

The Rays have worked extremely hard to get to the position they are now in. They have come this far by beating 3 top teams. Firstly, they defeated the Toronto Blue Jays, in a series of 2-0. They accomplished this by winning game 1, with a score of 3-1 and dominating Toronto in game 2, beating them 8-2 to advance. Rays started off strong and were then on to the New York Yankees. They beat the Yankees in a series of 3-2. This series was quite eventful, as the Rays lost the first game 9-3, but then went on to win 3 games and win the series with the Yankees only winning 2 games. They then defeated the Houston Astros in a 4-3 series. These 7 games were especially lively, as Tampa Bay leads 3-0, then the Astros proceeded to win the next 3 games tying the series. The 7th game of this series was so crucial, as the team to win it would go on to have a chance to win the World Series. The Rays ended up victorious in dramatic fashion and are now onto the World Series

We interviewed fans about our local team and asked them what they thought about different topics, such as, how do they think the series will play out, what it means to them and Tampa, etc. I asked a student who they thought was the better team and what it would mean to Tampa and they responded by saying this, “I think we are the better team we just have to play our game and be careful with every decision we make.” He also said, “It would be incredible after all this time Tampa has been waiting for their teams to finally win it and bring it back home so it definitely would be a memorable year for the Tampa fans this year without a doubt.” We also asked another fan about who they thought was the better team, “If we win this last series then no team would have been better than us.” We then asked him what he would think if the rays won, in response, he said, “It would mean the world for me being such a big baseball and hockey fan that would be like a dream come true and I think most of Tampa would stay the same.” This shows that many of our local fans really have high hopes for the series and Tampa in general.

All in all, the Rays have been having a fantastic year and will now hopefully bring a World Series home. Their hard work has definitely been paying off this postseason and it shows by how far they’ve made it. Many people have been doubting them and they completely shut up the haters by going to the World Series. If the rays win the world series, it would mean a ton for the fans and overall, the community. This is because it would be the first time the Rays won the world series along with the Lightning, who won the Stanley Cup.

On Tuesday the Rays, unfortunately, were defeated by the Dodgers in game 6 with a score of 3-1. Although they lost, their efforts should not be dismissed, even making it this far is a great accomplishment. The Rays and their fans should still be proud of the hard work and dedication put in by the Rays team. The Rays were wining, 1-0 up in the 5th inning. Blake Snell, the pitcher was playing an excellent game and caused problems for the Dodgers. He did not allow the Dodgers to score a single home run while he was pitching. Kevin Cash, the manager then made a controversial decision, taking out Snell and putting in Anderson. Anderson then gave away a double, allowing the Dodgers to take the lead in the 6th inning. The Dodgers then scored again in the 8th inning and finished the game up 3-1. This news is unfortunate for our local Rays fans, but we should have nothing but respect for all players and management on both teams, as they played a fair game and worked so hard to get there.