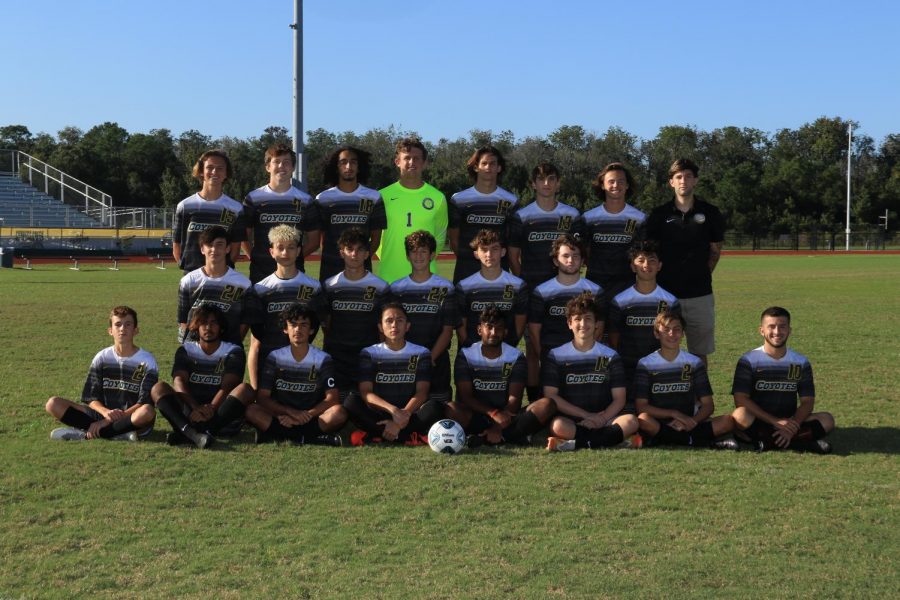 The boys’ varsity soccer season has recently started and has an exciting season ahead of them. Their season started up with the first game on Tuesday, November 10th. They started their season off right with a win over Anclote. Since then, they have played 3 more games. Their current record is 1 win, 1 tie, and 2 losses. While this record is not the most impressive, there is still a long, promising season ahead. The team is looking forward to becoming more successful than last year and go farther than the regional semi-finals.

This year, a large aspect that has changed the team is Covid-19. These changes have changed both the team as a whole and individual players. The most commonly apparent change for the team is wearing masks at nearly all times. From the first day of practice, the team has been required to wear masks in the locker room and when walking out to the practice field. After practice, the team must also wear masks back to the locker room. Masks are also required on all bus rides to and from games. The bus drivers are very strict about this rule and won’t let any player onto the bus without a mask. While on the bus, the players all have their own seat to themselves, to conform with social distancing regulations. In previous years, the team has shared a set of Gatorade squeeze bottles, but due to Covid, each player is required to bring their own water to both games and practices.
While no players on the team have tested positive for Covid since the season has started, players are still being taken out of play because of Covid. Before the first week of games, the team was already down two players, one being one of the captains. Both of these players were quarantined for two weeks due to the contact tracing regulations. Unfortunately, the first 2 weeks of games were against some of the hardest opponents the team will be playing in the season. Missing two crucial players for these games definitely had an effect on the team, but they had to overcome these challenges and make changes. It is a frustrating feeling for the team as they are taking proper precautions to stay safe and healthy, yet players are still being taken out due to unlucky circumstances.

I was able to ask one of the players some questions about the season and how they feel about it. I first asked how do you feel the season has gone so far? He responded by saying, “I feel that we could do so much better, this is the beginning of the season and we have to start playing hard”. I then asked, what do you think the team can improve to turn this season around? He said that “We definitely have to start being more aggressive, most of the teams are playing hard and they want to win, so we have to go to the field and fight until the end, our mental game has to be as strong as our physical game”. I also wanted to know what makes this team enjoyable for the players, so I asked what his favorite part about being on the team is. He told me, “My favorite part about being on this team is that even if we lose, we keep working and improving for the next game, we have good chemistry and we trust in each other”. I also asked how much of an effect do you think Covid has had on the team? He responded saying, “Covid has a big impact on the team, but we gotta be safe and take proper action to not get sick “. I finished off the interview with asking, how do you think the rest of the season will go? He answered saying that “I think things will turn around for the good of Cypress creek coyote soccer, we have to finish strong this season”.

No matter the circumstances, the Coyotes will continue to work hard and put their all into the game. The team was chosen because they wanted to be there and are ready to give their best effort and they show that every time they step onto the field, despite who they are playing against. Unexpected problems may continue to arise, but the team is sure to adapt and overcome them. There is still a long season ahead and a lot to prove, but the Coyotes are sure to be successful and have a successful season!