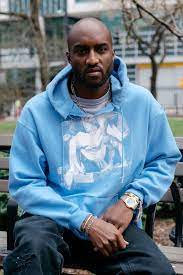 Virgil Abloh passed away at the age of 41 after a private battle with cardiac angiosarcoma, a rare form of cancer. Virgil was the CEO and founder of Off-White and was the men’s artistic director for Louis Vuitton. He had an influence on fashion that was unmatched by most and collaborated with countless brands and artists, always giving his take on already classic pieces.

Virgil was born September 30, 1980, in Rockford, Illinois. Growing up his mother was a seamstress who taught Virgil how to sew early on in his life. After receiving a bachelor’s degree in civil engineering from the University of Wisconsin-Madison in 2002, Virgil attended the Illinois Institute of Technology, where he received his master’s in architecture in 2006. While attending IIT, there was a building on campus designed by Rem Koolhaas; an artist who had previously worked on runway collections for Prada. This sparked his interest in fashion, where he would begin designing and printing T-shirts for a blog, The Brilliance. It would be around this time that he would meet Kanye West.

Over time, the two developed a relationship where they would collaborate on several artistic pieces which resulted in Kanye appointing Virgil as the creative director of Donda, West’s creative agency named after his late mother. Abloh then went on to start up his first brand, Pyrex Vision in 2012, where he would purchase deadstock Ralph-Lauren clothing and screen print his designs, which would sell for upwards of $500.Although the brand gained success and began to be recognized by many, Abloh closed the brand down, intending for it to be an artistic experiment.

Beginning in 2013, Virgil Abloh founded Off-White; based in Milan, Off-White combined the concepts of streetwear, luxury, art, music, and travel and was described as “the gray area between black and white as the color Off-White.” From the beginning, the quotation mark became the signature of the brand. The brand continued to gain traction and in 2017, Abloh would get the opportunity of a lifetime: to collaborate with Nike on a project called The Ten. In this collaborative effort, Virgil was given ten of Nike’s most iconic sneaker silhouettes and received creative freedom to modify them as much as he wished. The sneakers resembled a “work-in-progress” style containing subtle changes to the original model of each of the silhouettes. By the end of 2018, Off-White was ranked the hottest brand in the world by an index of sales and consumer sentiment.

On March 25, 2018, Virgil Abloh received a bigger opportunity than anything he had previously done: He was named the artistic director of the menswear collections for Louis Vuitton. When it was announced that Virgil had accepted this position, he stated “It is an honor for me to accept this position. I find the heritage and creative integrity of the house are key inspirations and will look to reference them both while drawing parallels to modern times.” Abloh debuted his first collection for Louis Vuitton at the 2018 Men’s Fashion Week which took place at the Palais-Royal Gardens in Paris.

Virgil also had a massive influence on the music industry. Meeting Kanye West back in 2006 was only the beginning of his career and quickly became hip-hop’s favorite designer. Abloh also designed the cover arts for several iconic albums such as My Beautiful Dark Twisted Fantasy (Kanye West), Watch the Throne (Kanye West x Jay-Z), Luv is Rage 2 (Lil Uzi Vert), and LONG.LIVE.A$AP (A$AP Rocky). Some of the biggest names to have supported Virgil over the years are Kanye West, Drake, Rihanna, Kid Cudi, Travis Scott, Lil Uzi Vert, Young Thug, A$AP Rocky, and Tyler, the Creator.

Up until his death, Virgil Abloh consistently pushed the boundaries of art in more ways than just clothing. Furniture, music, museum art pieces, and accessories are just some of the examples of the things Abloh experimented on and thrived in. He was a jack of all trades and was a true artist. His influence has changed the way most people look at simple things like iconic sneaker models, simple furniture, accessories and many other things. He is survived by his wife, Shannon Abloh; and his two children, Grey Abloh and Lowe Abloh. Rest in peace, Virgil Abloh